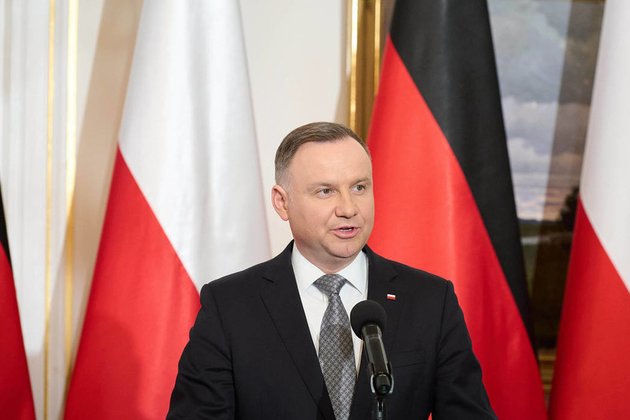 Germany has failed to supply Poland with battle tanks after Warsaw depleted its own stocks to send heavy equipment to Ukraine, Polish President Andrzej Duda told Germany's Die Welt newspaper on Tuesday on the sidelines of the World Economic Forum in Davos.

Poland has "weakened" its own military potential by using its own stocks to supply Kiev with "a large number of tanks," Duda said, adding that Warsaw had expected support from NATO and Berlin in particular.

Most of Poland's tanks are German-made Leopards, the president explained, adding that Berlin earlier promised to replace military hardware delivered to Ukraine.

"Germany promised to deliver these tanks to us. You have not kept that promise. And, frankly, we are very disappointed about this," Duda told the paper. The president also rebuked Berlin for supposedly not doing enough to support Ukraine.

"First of all, it is Germany itself that should help Ukraine. Ukraine needs this help urgently," he said, adding that Poland stepped in with heavy equipment deliveries because other nations were reluctant to make such commitments.

The president did not clarify how many Polish tanks have been sent to Ukraine and when the deliveries took place. Berlin has so far not commented on Duda's accusations.

Ukraine, which has been locked in a conflict with Moscow since Russia launched its military offensive in late February, has repeatedly asked Western nations for military aid, particularly heavy weaponry. Western powers have supplied Ukraine with small arms, anti-tank and anti-aircraft weaponry, as well as munitions and fuel, but have so far been reluctant to send in heavy equipment such as tanks or aircraft.

Last week, Germany announced another such swap, this time with the Czech Republic. Prague is now expecting to receive 15 Leopard 2 tanks from German stocks in exchange for tank deliveries to Ukraine.

Russia launched its offensive against Ukraine in late February, following Kiev's failure to implement the terms of the Minsk agreements, first signed in 2014, and Moscow's eventual recognition of the Donbass republics of Donetsk and Lugansk. The German- and French-brokered protocols were designed to give the breakaway regions special status within the Ukrainian state.

The Kremlin has since demanded that Ukraine officially declare itself a neutral country that will never join the US-led NATO military bloc. Kiev insists the Russian offensive was completely unprovoked and has denied claims it was planning to retake the two republics by force.